With Making Incredible Time, Roman Watchdogs, and Late For Life

Rock out with The Experiments, A-Borts, Midnight TracK & Reckless Disregard.

We've got new music!  "Recorded History Vol. II"  Head on over to the Music page and check it out!

We’ve always had a do-it-yourself ethos when it comes to recording. Our first recordings in 1994 were done on a four track cassette porta studio on a shaking enclosed porch attached to my apartment, the goal always being to make it sound as good as we could while taking into consideration our limited budget and equipment. Over the years the studio has morphed from 4 track cassette to 8, 16 and then 24 track ADAT machines that recorded on VHS tapes, to computer based software programs like Logic and Pro-tools. Dave’s ever expanding  computer knowledge and bank account helped immensely with that transition.

As part of our 21 year anniversary celebration we wanted to put together an overview of that evolution, as well as fill in some of the blank spots in our catalogue. We’re calling this "Recorded History - Volume 2", but we haven’t put Volume 1 together yet. This album covers the last 10 years or so when the studio in the apartment kind of evolved the most, as did  the technology  and affordability of home recording equipment. Getting better microphones helped a lot too. The album is made up of recordings that we never put on any of our other releases for one reason or another, as well as some new songs, but they all seemed to fit together in this format. Hope you enjoy it.

* This Side Of My Brain :  A song of Andy’s that we’ve been playing for a long time. A live version appeared on 2004’s "The Experiments". This version was recorded in 2011 using Pro tools.

* Loudmouthed, Belligerent, AM Hotheads :  We wrote and recorded this one in 2012 just before the last presidential election. I seem to remember the airwaves reaching a fever pitch of static and noise at the time, and here we go again. We put an unmastered version of this on the website but this one is a different mix and mastered.

* Ready, Willing and Able: This is another new version of an old song. Also from 2011 using pro tools.

* Hypocrite:  We recorded this in 2005 at the apex of our 16 track ADAT set up. We could even get as many as  24 tracks at times when all 3 machines were working at once, which wasn’t often.

* Drag The Canal:  In 2008 we made a demo version of what would become our album "What Kind of Animal?" using Logic software. It was our first stab at digital computer based recording on our own, so we were learning a lot as we were doing it.  This version was a little different than the one that was on the album so we included it.

* Character Assassination :  This one is from 2004 around the time when Brian first joined the band. It appeared on a couple of compilation albums but never on one of ours. I mixed the previously mastered version of this into mono because there was only one cymbal panned off to the right side, and I wanted that to come more from the middle.

* Us Guys Vs. Them:  Also from the 2008 demo sessions for "What Kind Of Animal?" using Logic. If only every one used it.

* Come on:  A song of encouragement towards the future as well as a tribute to other songs that had a lot of ‘Come On’s in them. "Step On Up" as Uncle Bill would say. From 2012 using Pro Tools.

All songs written by the Experiments except "Drag The Canal" written by Bob Koch and Andy Guyette.

All songs recorded mixed and mastered by us in Dan’s Apartment.

What else do you want?

Starting at 5pm sharp, in this order:

Show: Saturday June 29th at the Tiki House in P.B. with MIT and Tony S. FREE!

We've got a new song up, just in time for the election.  It's called Loud Mouthed Belligerent AM Hot Heads and you can listen to it by clicking play over there on the right.  You can download it on the Music page. (It's under "new")

Last minute show TONIGHT (March 16) at The Tiki House in PB. 1152 Garnet Ave.  With Tony Silipigno and MIT (ex-12Cent members). See you there!

Christmas!  We have a show on Friday, December 23 at the Tiki House in P.B.  It will feature special guests like Pete Nutz, Magic Matt Young and more. 1152 Garnet Ave.

Hey all, we are playing TOMORROW - Friday Aug 5th at the Shakedown, with Strangely Strange.  It's their CD release party. We're up first at 9:30pm.  3048 Midway Drive

We're on the "Big Enchilada" podcast.  Check it out: http://www.bigenchiladapodcast.com/2011/06/podcast-37-summer-voodoo-fun.html

Our song "It's Friday Night And I Wanna Get Laid" is on another compilation.  This one is more "metal", whereas last weeks was more, well, garage punk. :)

We're on a new compilation from the GRGPNK records: Songs the Hideout Taught Us - The Best of the GaragePunk Hideout, Vol. 2.  Our song "It's Friday Night And I Wanna Get Laid" is the 2nd song on the comp.  I just listened to the whole thing and it's really good.  Lots of great songs on there.

Set up the new studio at Dan's place and recorded drums for 2 songs today.  It sounds great so far.  We hope to have something for you listen to in a few weeks.

Show just added:  This Saturday, April 2 at O'Connell's.   Show starts at 9pm. We're up first, so come early.  Details at the Shows page

Our song Wave is on the Home Made Hit Show!  Check it out.

La petite mort, French for "the little death", is a metaphor for orgasm.

So that's got to be a good show, right?  Go check it out.

Hello.  I updated the website with a new player, based on JPlayer.  The upside there is that it works on the iPhone/iPad/iPod Touch.  Also a few more tweaks for iOS device support, and full album downloads for some albums.  I'll get around to adding full downloads for all the albums in a few days,  As always, if you find any bugs or have suggestions, drop me a line at geekd@yahoo.com

So, who are The Experiments?  We're a San Diego based rock / punk band that's been playing in Southern California and across the USA since 1994.  We've got 5 studio albums out, as well as several live recordings.  You can get all our music for free under the Creative Commons license here on our website.  Just click the music link in the menu up there.

This is a new website for us, and some of the content from the old site has not made it over yet, but I'll get it all over here eventually.

We don't have any shows lined up at the moment, as we are taking a little break while members visit family, etc.  But go listen to some music, and check back and we'll be sure to ket you know when we are playing next

Hello!  Welcome to the new website, I hope you like it.  I think it's a huge improvement over the old site, which was aging poorly.

If you see anything that doesn't work, or if you have suggestions for improvement, please email me about it at geekd@yahoo.com.

Things might be a little wonky for the rest of the night, as I roll the new site out.  Your patience is appreciated. 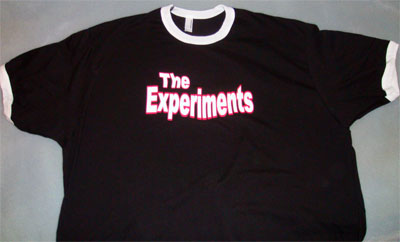 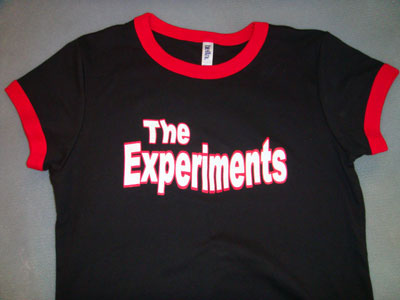 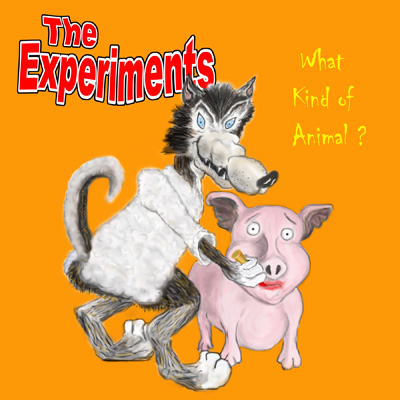 $5 The Experiments new CD, "What Kind Of Animal?" (2010). Recorded & mixed by us in a big warehouse and at Dan's apartment, this is our latest and greatest. You can get all the songs for free on the Music page, but some people want a physical CD in their hands.

At $5, we're not making any money on this, we just cover our costs and get our music into as many ears as possible. 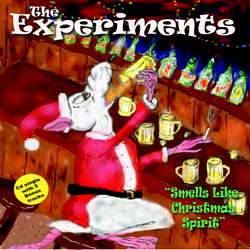 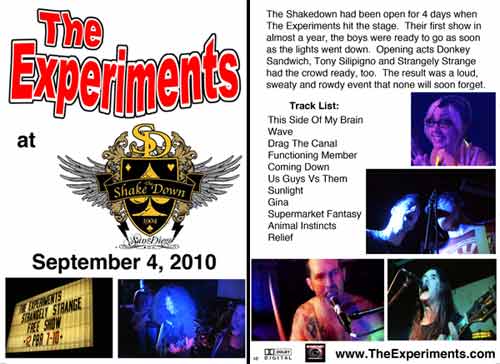 $5 - DVD Live at The Shakedown, September 4, 2010. Audio recorded on 7 tracks and mixed in Pro Tools, video shot on 2 cameras. 11 songs, some of which you can see on the Video page. It was a great show. If you've never seen us, this DVD captures the essence of The Experiments live.

Like the CD, $5 just covers our costs. We just want as many people as possible to see what we are like live.

$2 for 5 stickers. High quality vinyl.
The store is PayPal only.

Rock, punk, whatever. It's aggressive, it's fast, it's in your face. Influenced by anyone who's screamed into a mic or ripped a guitar solo in the last 30 years, The Experiments have seen and done it all. Veterans of the SoCal scene, they've played in NYC, L.A. and everywhere in between.

Formed in 1994 in San Diego, The Experiments have released 4 full length albums and 1 EP. Their latest, "What Kind Of Animal?" was released in May, 2010, and was a complete DIY project. It was recorded, engineered and mixed by the band, and has been released for free under the Creative Commons license.

For more info, and to download all their free music, please visit http://theexperiments.com or email Dave Blood at geekd@yahoo.com

Images and One Sheets

Podcasts that feature The Experiments